A Texas law that bans most abortions after six weeks of pregnancy went into effect Wednesday, as a midnight deadline for the Supreme Court to stop it came and went without action. The court could still grant a request from abortion providers to halt the law, one of the nation’s most restrictive.

Vanilla ISIS is committing violent terrorism and treason at the Capitol today (fueled by Agolf Twittler), and they are being treated VERY differently than BLM protesters were.  BLM protesters didn’t storm the capital and break windows and seize the dais for photo opportunities.

There is a DISTINCT DIFFERENCE between the way that BIPOC people are treated and the way that the white supremacist Y’all-Qaeda are being treated.

No Matter What Lawsuits He May File, President Trump Is an Epic Loser

Donald Trump is having a terrible November. First, he loses the presidential election as an incumbent in historic fashion. Then, in his much-hyped litigation explosion to show the world that he really won on November 3rd, he has lost in court repeatedly. There’s just no two ways about it: Donald Trump will leave office as an epic loser.

Dan Rather: “We Are Well Past Warning Shots” – News & Guts Media

What a complete fucking idiot

Even THIS fetid sociopath abscessed prolapse below wears one. 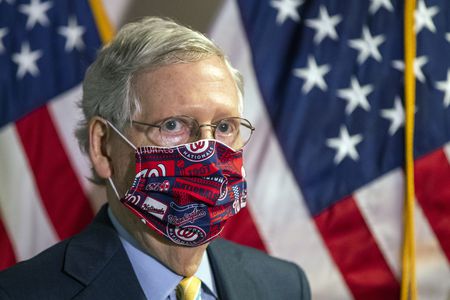 Receipts from the racist wypipo in our lives…

I love it because it calls attention to the vicious racism in our country, and it punishes those who air that vitriol in public places.  Racism has always existed, but it had never been made so “okay” until the rectal prolapse we call a president came into being.  Then suddenly it’s as if all the slime crawled out from under rocks to scream racist things, do racist things, scream about makes and liberty, and yell FAKENEWS as often as they can. Racism must ALWAYS be punished in a very public way. Only then will it become unpopular again.

FUCK THOSE PEOPLE. LOSE THAT JOB. BE MAD.

As Trump melts down in front of the nation and burns everything we are to the ground, I feel it worth mentioning to conservative christians and republican politicians that we have a long memory span.

When sanity returns, we hold YOU responsible for what has happened, and we will call you to the carpet.

On July 4th, 1976 I was 11 years old.  I have a strong and fond memory of being with my dad at an air show and 4th of July event. It was a Bicentennial celebration. They were giving away these long-wallet sized folders that had a folded and fake-aged Declaration of Independence in one pocket, and a crisp 2-dollar bill, a bicentennial re-release, in the other pocket.

The airshow, with biplanes doing loop-de-loops and fighter jets doing flybys, was magical. It was capped by an evening of live drum and bugle corps and a massive fireworks show. It all felt so big to 11-year old me.  It was my first awareness of feeling patriotic and pride for my country and the possibilities that seemed to be there for me. It felt hopeful and inspiring.

Why wouldn’t I feel that way? It was a good show and I had won the lottery; being born a white male in the United States. I didn’t know then just how important those things would become as I grew up; facing my own challenges in life.

I’m not entirely sure when that feeling of hope and possibility started to fade.  I think part of it was when I discovered I didn’t fit neatly into the sexual orientation norm, and learned that I had to hide it as I watched those who were different getting bullied, legislated against, and beat up. I learned to keep my head down. But I still had “white” and “male” going for me.  I had the option of fading into the crowd.

In 1980, the city of Miami erupted into riots over four cops being acquitted over the death of a black man named Arthur McDuffie. I lived in South Florida at the time (about 20 miles north of Miami), and I remember how surreal everything was. I didn’t have much understanding of what it was about and why people were burning down their own neighborhoods. How could I have understood it; not having lived their experiences?

Being white and male did not automatically entitle me to ease and riches. I had my own struggles.  While I had a strong sense of values, work ethic, and morals growing up, I was not terribly adept with money and handling responsibility. I viscerally remember the moment when I spent that 2-dollar bill on cigarettes when I was sleeping in my car and out of money (I still have that Declaration though), and nicotine seemed more important than food.  It did not occur to me at the time that my being white might have saved me from being arrested when found sleeping in my car a few times.

In 1988 I moved from Atlanta to Los Angeles. I was carried into the middle class (my partner at the time) and started my own business. I enjoyed slow and steady success and a whole new kind of existing in the world.  Los Angeles felt way safer for a queer person than the bible belt. Californians in general seemed more accepting of others and of diversity.

Then in 1991, a man named Rodney King was seen on camera being beaten by five LAPD officers.  It was all over the news. It reminded me of Liberty City.  It reminded me of the bubble that I live in.  It reminded me what I had taken for granted. By April/May of 1992, LA was experiencing riots everywhere as four of those cops were acquitted after a very long trial.

This time, I understood what was happening.  I watched and listened and understood the anger and frustration of people of color but felt helpless and hopeless to be part of the solution.

And then hope returned on November 4th, 2008.  Obama was elected and I cried.  He represented “yes we can” and a newfound sense of hope for ALL people.  My mother had passed away just two months prior. She would have been amazed to see this miracle.  I felt such joy.  Obama had his faults as president, but he was a president who united, not divided. The most scandalous true thing that any detractors could find was the pearl clutching had at this tan suit’s expense.  It really seemed like compassion was coming back to this country.

Oh how naïve I was. The night Trump got elected I cried again, but this time in horror.  It seemed inconceivable that such a monster had actually achieved enough votes to get him the electoral college.  It’s been a long slide down a very thin razor blade ever since that day as he has (seemingly with great joy) divided our country and served only his base (but not really, because he’s not actually giving them anything but conservative judges and “punishing the black guy” who had the audacity to enact compassionate laws).

Tonight, I watch the news as a city burns and demonstrations and riots pepper the land with the rage of so many who have been victimized by a foul and fascist system. Yet another black man murdered by cops in front of video cameras.  In the preceding days the news and arrests surrounding a black man who was lynched in Georgia, and an event where a woman in central park attempts “death by cop” on a black man who had the audacity to ask her to please leash her dog like the posted signs said.

So comes the protests and riots.  These riots feel different to me.  In 1980 I felt scared.  In 1992 I felt hopeless and helpless.  In this instance all I feel is bitter and venomous unfettered rage. I feel rage for those being victimized by racism. I feel rage from all the victims of Trump’s vile and evil dismantling of the safety nets, health systems, civil protections, environmental protections, and basic human decency.  I feel rage at his mocking and dangerous tweets, constant attacks, constant lies, constant division, and childish threats.  Our system of checks and balances has failed. Our economy only makes the rich richer, and the poor and middle class suffer.  We have lost the respect of the world around us. I am surrounded by so many who are also experiencing this rage and sadness.

I feel the rage of those rioters.  And I support their rage. I support their need to burn it all down. Nothing else has worked.  We are at a tipping point.  Pretty soon I fear might be the time for many of use to unleash our rage.

Trump didn’t invent these problems we’re having now. He is the result of our problems. He’s weaponized these problems.  He is but one inept horseman of the apocalypse that is consumed with narcissism and sociopathy.  Compassion is in short supply and we don’t appear to have the political or social will to bring human dignity and compassion to all our affairs.

That night in 1976 was a lie. It all made for a pretty story, but the abscess has been there the entire time.

And, as if we really needed yet another way to find out who we all truly are as Americans, there’s this goddamned pandemic…

We shall sell no wine until you pay for it…

Hot night vibes by the pool

Full of birthday sushi! Where the cuddle puddle at

My most enduring hobby interest…

I was faced with a choice: if I didn't eat, I would offend my cannibal hosts; but if I ate, and, later on, Gary asked me how his foot tasted, I might have to lie and say it was great, even if it wasn't.
- Jack Handy